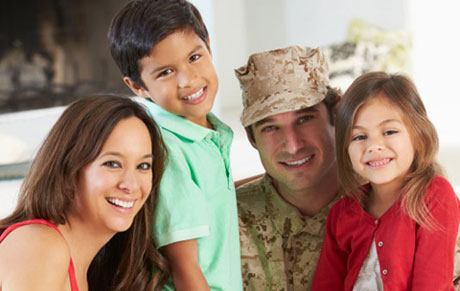 The Department of Homeland Security has issued a new policy that will help unauthorized and undocumented military dependents to secure permanent immigration status as soon as possible.  This effort seeks to relieve active-duty soldiers of the fear that their undocumented family members could be deported while they are deployed overseas.

Termed “Parole in Place,” this action will allow active military troops, as well as veterans, to know that relatives who are here illegally can be protected from deportation.  It guards the spouses, children, and parents of those on active duty as well as those who served in the armed forces in the past.

What that means is that noncitizen spouses, parents, and ummarried minor children of U.S. citizen members of the U.S. military (current or past) who are in the U.S. after an unlawful entry now have (as of November 2013) a path to a U.S. green card that is not available to others.

Family members can change their status via Parole in Place so that their unlawful entry will not bar them from applying for adjustment of status.  They can stay in the U.S. and move toward becoming permanent residents.

This opportunity allows those who already qualify for a green card based on this close family relationship to “adjust status”.  The can therefor apply for lawful permanent residence or a green card without leaving the U.S., despite their past illegal entry and stay.  Those immigrants who receive Parole in Place will have work permits, but will have to renew their documents every year.

It only seems fair that military members who have served our country selflessly and courageously can be assured that their spouses, children, and parents will be allowed to stay in the U.S. and pursue legal residency here.  They won’t be forced to leave the country and potentially be trapped overseas for years—often in dangerous places—before being allowed to return and work to become U.S. citizens.

Temporary Protected Status (TPS) has been extended for eligible Haitians for an additional 18 months, starting July 23, 2014 through January 22, 2016. If you have already been granted TPS, you must re-register during the 60-day period from March 3, 2014, through May 2, 2014. Re-register as soon as possible.

The extension will also provide a new Work Authorization (EAD) for those who request it. You will receive a new EAD card with an expiration date of Jan. 22, 2016. If you have re-registered, but do not receive your new EAD before your current card expires, USCIS is automatically extending your current card for an additional six months. These existing EADs are now valid through Jan. 22, 2015.

If you have a TPS Haiti EAD with an original expiration date of July 22, 2014, you may continue to work even if you have not yet received your new EAD card. Show your employer your current TPS-related EAD and a copy of the Federal Register notice. If USCIS approves your TPS re-registration application and you requested an EAD, you will be issued a new card with an expiration date of January 22, 2016.